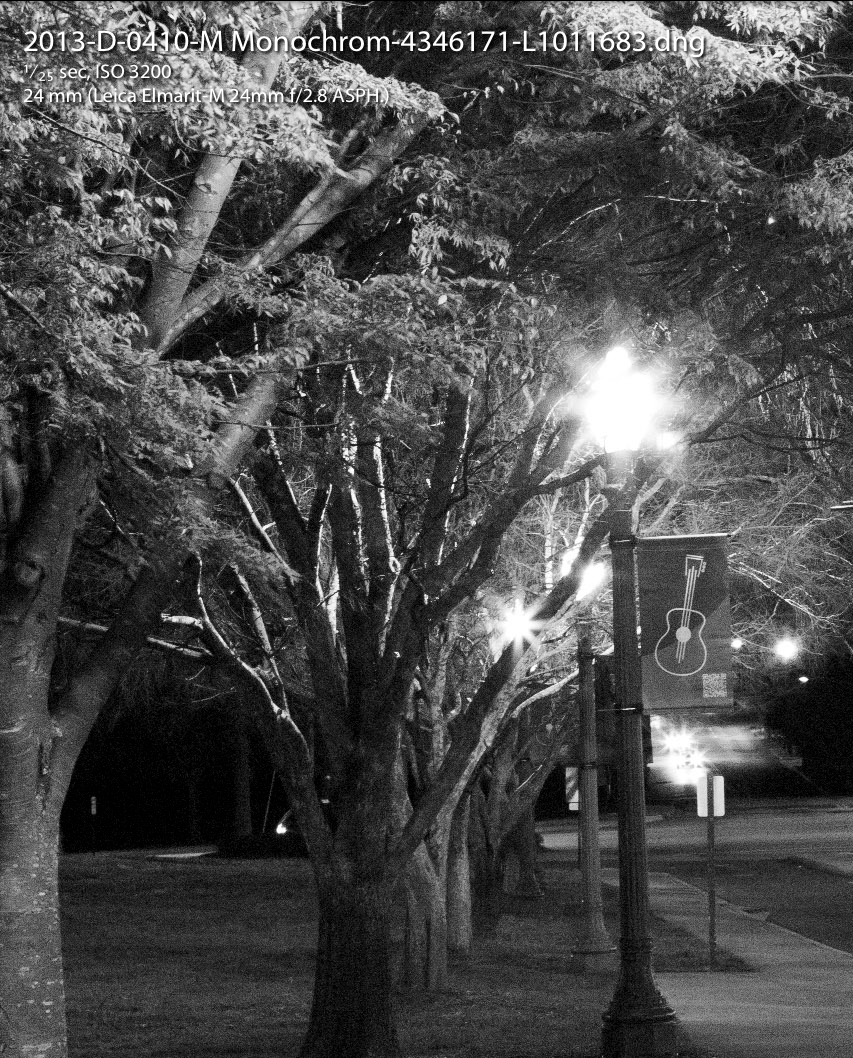 First, this is not scientific, but a simple review of two images to compare the flare in two Leica wide angle lenses.  In order to make a more thorough conclusion, one would need to take multiple images at varying f/stops and conditions with more measurable data.  I decided to make this quick comparison because I wanted to have the best 24mm for my photography style in my kit.

I read different reviews of the new Leica Elmar-M 24 3.8 ASPH lens compared to the Leica Elmarit-M 24 2.8 ASPH lens.  The Elmarit 2.8 is older in design than the Elmar 3.8 having been designed in 1998 versus 2008.  However, the Elmarit is also not quite twice as expensive and has a 1 stop advantage.  The review from Erwin Puts’ Compendium indicates the Elmarit 24 f/2.8 ASPH is a great lens that is the result of (excuse my paraphrasing)

… once in awhile everything comes together perfectly for a lens design.”
– Erwin Puts

I have no doubt that Mr. Puts is correct as his work is astounding in knowledge and detail.   I have also read about the much better flat focus plane on the Elmar lens.  The Elmarit has a curved back focus plane on the edges which can cause some landscape type photography to be less crisp in those areas.  No doubt, like so many of the superb Leica lenses, the designer had to make a tradeoff for the f-stop and size of the lens.

So, I wanted to try a simple flare text.  The time was 10pm and a well lit main street gave me many points of light to test.  I shot a series of images although I only post two here.  The first is the Elmar at f/3.8.  The second, the Elmarit at f/4.0.  Both are shot at 1/25 sec and ISO 3200 (shown in the images from Adobe Lightroom 4.4).   I adjusted the Elmar image in Lightroom using the histogram and contrast only.  I copied those adjustments to the Elmarit image so they would have the same exposure and the same development, per sae.  You can click on these images to view larger sizes.

I noticed in the Elmar test that the light from the lamp posts did spread some, but reasonable for the type of light.  However, when I viewed the Elmarit I was surprised. 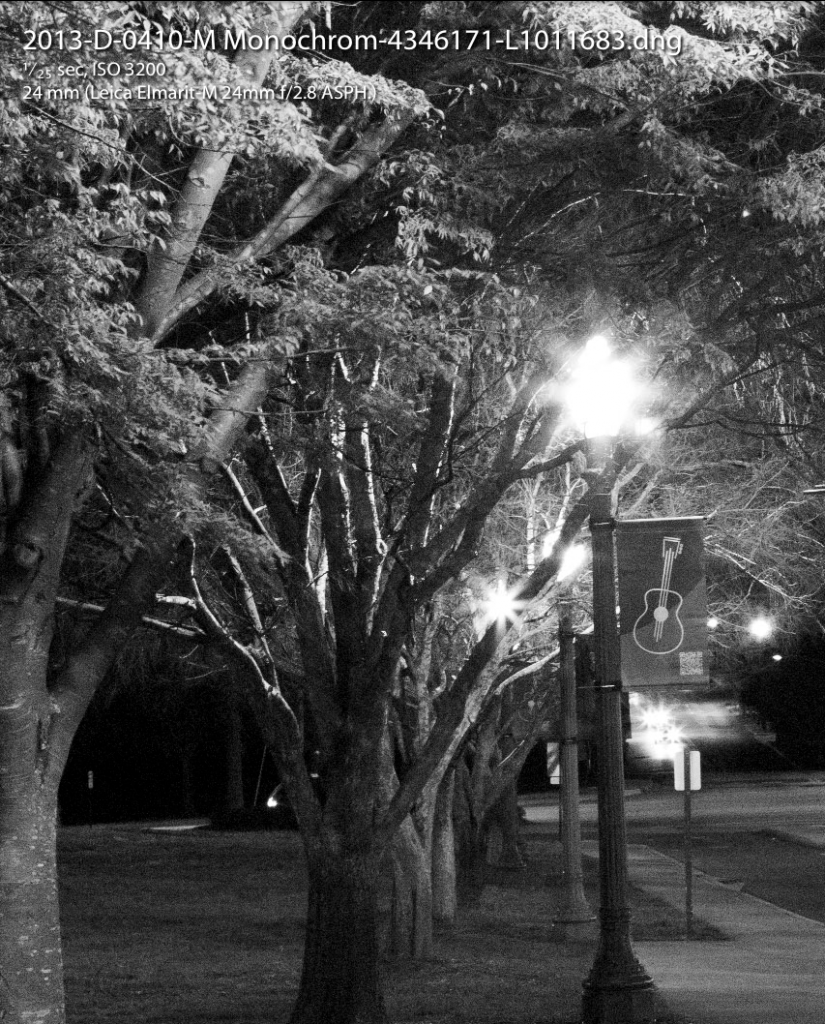 The flare was more significant and carried the pattern of the aperture.  Now to be fair, that makes some sense.  At full aperture, there is no leaf pattern because the diaphragm is wide open.  Also, the Elmar exhibited a similar flare pattern at f/5.6.

So, what is the conclusion?  My conclusion was that I could produce an image with extreme highlights and a reasonable depth of field and sharpness with the Elmar compared to the Elmarit.  I believe this is due to the smaller starting aperture of the Elmar, f/3.4 versus f/2.8.  However, after viewing both images, I see similar contrast and tonal range as well as some flare.  I think the Elmar has slightly less flare overall.

The Elmar design is much newer, supporting my conclusion.  However, the Elmar is significantly less expensive as well.  Leica have produced a great lens in their lineup for a very efficient cost to the photographer.  The Elmarit is no longer manufactured and the Elmarit price point no longer exists for a 24mm lens.  Both the 21mm and 24mm have a Summilux f/1.4 model in the high price range and a Super-Elmar and Elmar in the more affordable range.  Each has their place based on the f/stop required by the photographer.  Each also has strengths in field sharpness and contrast.

Has the Elmarit just gone away with the advance in lens design?  Making the decision to part with my Elmarit was not easy as I’ve owned it since 2008.  However, in this case, I believe Leica have designed a superb replacement and offered to share the savings with their customer.  I am looking forward to more low light imaging with the Elmar using the Leica M Monochrom as well as landscape photography with the Leica M9-P.

2014 UPDATE:  So, after time I decided to purchase another Leica Elmarit-M 24mm f/2.8 ASPH.  This time it was a chrome edition (chromed brass versus black aluminum).  As I continue to shoot more and more with the Leica Monochom, I find the Elmarit has extremely good tones throughout the image.  The image is bright and contrasty.  Ultimately, I sold the Elmar even though it was compact.  While the Elmar is a tremendous travel lens and fast to focus, I pref the ultimate image quality of the older Elmarit.  The Chrome edition is hard to come by now, but has a very smooth focus and well balanced weight.