This article is part of my series on the study of ‘The Photographer’s Eye’ by Micheal Freeman.

What is the Golden Ratio? The answer is 1.618… No, this is not the answer to the question ‘What is the meaning of Life, the Universe and Everything?‘ which is 42. If you haven’t read the Hitchhiker’s Guide to the Galaxy by Douglas Adams, then don’t worry, read on.

History of The Golden Rule

The golden ratio appears frequently in the study of mathematics and more specifically, geometry. The ancient Greeks began studying this ratio because of it’s tie to mathematics. The Greeks have given the credit for the discovery to Pythagoras who is most frequently known for developing the Pythagorean Theorem, or a^2 + b^2 = c^2.

Euclid was the first to record the Golden Rule. Euclid said, in his series of books called the ‘Elements‘,

A straight line is said to have been cut in extreme and mean ratio when, as the whole line is to the greater segment, so is the greater to the less.

What Euclid is saying is that when the ratio of the total length of any line to a certain portion of that line is the same as the ratio of the two segments of the line to each other, then you have a division equal to the Golden Rule. In mathematical formula terms, if you have a line divided into a and b like the following from the Wikpedia Article on the Golden Rule, The application of this ‘magical’ number can be used by first understanding the ratio in terms of frame size. Recall we said that a 24mm x 36mm film negative is in the ratio of 1.5 to 1.0, or close to The Golden Rule. If we have a negative that is 20mm high, then the application of the golden rule would say we want a width of 20mm x 1.618, or 32.4mm. This would provide an image Frame that applies the Golden Rule.

Unfortunately, the size of most films and digital imagers does not follow the Golden Rule. How do we use the Golden Rule in photography? We divide the frame.

Dividing the frame into sections was the topic we began in the last essay and is the topic we continue here. First, we will round the Golden Rule to 1.6 for the remainder of our work, because we can more easily estimate sizes.

By taking a Frame size and dividing the width and height into the Golden Rule, you can find four points, one in each quadrant of the frame, that translates to these locations. 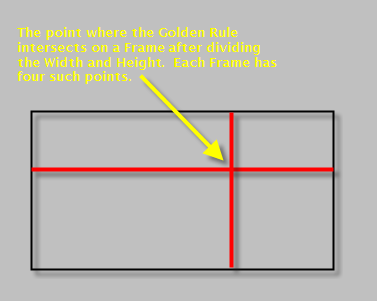 Does this mean the Subject of an image should reside at that point? It can, especially if the subject is very small in relation to the remainder of the image. For example, a small desert plant could be placed in one of the four locations with sand encompassing the rest of the image.

What if the Subject is large? Then we have another choice. Instead of placing the Subject at one of the four points, use the point to create a rectangle within the Frame. 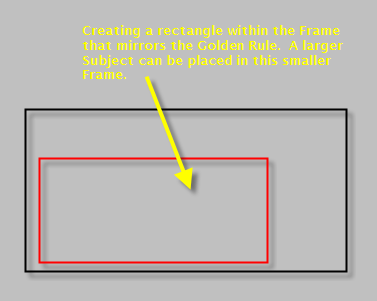 Then, place a larger subject within the smaller Frame. Obviously, since there are four points within a Frame that correspond to the Golden Rule, there are four rectangles within the Frame that also correspond to the Golden Rule. An example of using this concept would include an image of a dock at the beach in the evening. The dock could be placed in one of the two bottom divisions with the ocean and sky filling the remaining areas.

A concept that we will further explore as we move on is multiple divisions. Frequently our images do not have such simple subjects and backgrounds and they may include multiple subjects. A more advanced method of applying the Golden Rule is to take a divided Frame, like in the example shown above, and further divide the remaining areas into new Golden Rule areas. This can be done several times, although the more divisions, the more complex the image and the more time involved in placing the camera to record the image.

Multiple divisions are increasingly more complex and really only lend themselves to still images where the proper time can be taken divide the image on the Frame. In addition, practicing a simple Golden Rule division for awhile will help make multiple divisions easier. I.e., practice makes perfect.

For this essay, take four sheets of paper and draw a Frame size that fits your photography equipment. If you have multiple Frame sizes available, pick one and stick with it. If you have access to transparency sheets, they will work better as you can view a subject through your sheet.

After creating the Frame, divide each Frame into the Golden Rule and, using a different color than the Frame color, draw the two intersecting lines. Use a ruler and be as precise as you can. Using the same different color, mark the point of intersection with a round dot you can see at arms length. You should end up with a Frame marked similar to the images above.

Take these four sheets and find at least four different subjects, preferably two small and two larger subjects. For each subject, hold up each frame in turn to the subject. Place the smaller subjects at the points of intersection and the larger subjects in the largest division. Study these through the drawn frames.

Then, shoot each subject in the four locations through your camera, placing them in the proper location as best as you can. Print each of the sixteen images and study and make notes about the different placements. Divide each image on paper, using a ruler and a marker, into the Golden Rule. Alternatively, you can take more transparency material and scale down a frame size to the printed size. Then you can overlay the Golden Rule on each image while taking notes.

As and added challenge, repeat the exercise using the same subjects as the previous exercise. Compare the locations of these subjects between simple linear divisions and the Golden Rule. Which ones seem to represent the subject the best? the most pleasing?

Also, if you wish, try making Frames on transparencies with multiple levels of division. Shoot several complex images trying to place multiple subjects in these divisions.

Using these sheets as a guide, your eye will become accustomed to where the points lie in the Frame. This takes time to develop but will be well worth your time, especially if you shoot candid street shots. Fast paced photography does not give you the luxury of measuring and setting up a photo opportunity. They are there and then gone.

Take these transparencies with you and use them with still images before lifting your camera. See where the placement would be. When finished, print out the image and see how well you cropped the subject within the division.

Viewing, shooting the image, printing and reviewing after the fact will train your eye to reach the Golden Rule without thinking. Good luck!