I have been a film photographer for over 20 years, shooting with Leicas the last two years. Because really good lenses (the foundation of a great image) are so expensive, then the natural progression for me from film into digital was with a Leica M8. I still love film and will use it equally as much as digital depending on the shooting conditions.

However, I have taken some of my first images with an M8 and imported them into Lightroom 2.0. Here I’ll share with you some initial thoughts and few interesting tidbits I discovered on the web.

First, I’ll tell you that I am NOT comparing the M8 to any of the Cannon and Nikon DSLR’s. My presumption here is that you are interested in the M8. This is not a review, but more of a hands on experience. However, I am comparing this to using images from Leica DLUX3 which is one of only a couple of pocket cameras that produce a RAW image file. Remember, we’re talking file size, not quality of lens or components.

Yes, if any of you are familiar with the DLux3, the save speed on the camera is slow. The other issue I have noticed is a slight red shift in certain landscape photography, most noticeably high contrast images such as snow. However, shooting landscapes I typically have a moment longer to wait and Lightroom does a great job of shifting the red back into alignment. I use the DLux3 to see what the resulting images look like before committing some to film. The point is the resulting RAW file sizes and the transfer speed to my Lightroom catalog.

The first thing I noticed about the M8 was that it saves images in a native DNG format. I understand that Adobe initially created two methods of creating a DNG and Leica being one of the first, picked up a slightly different method than is used more commonly today. In fact, for the really scientific minded, there is a great article posted on The Riddle of the M8 DNG File. But be warned it is technical!

Here’s the key. The M8 is saving the images directly as a DNG file whereas the DLux3 was saving as a RAW file. The result is the M8 immediately has smaller filesizes. If you can convert these in Lightroom, what is the big deal? ANSWER: the speed of SD cards and USB connections is realtively slow compared to memory and CPU speeds. So, if we start with a smaller file size, uploading into a Lightroom catalog is exponentially faster. In the case of the DLux3, RAW images were about 30mb (10 mega pixel camera x 3 channels, R, G, B). The M8 produces the same 10 mega pixel image, but by saving the image as a DNG file, the size is only 10mb. Thus, the upload speed to Lightroom from an M8 card is 1/3 that of the DLux3 card.

Previously, with the DLux3, I would import into Lightroom and convert the RAW image to a DNG format to save filespace. I was already waiting awhile to import the 30mb image files, so a little longer to convert the file was fine with me and the smaller file size in the catalog made reading the file in Lightroom faster too. So what about the M8?

Using the Lightroom import, convert the DNG files from the SD Card to, yes it’s redundant sounding, a DNG file. The resulting new DNG files in the Lightroom catalog can vary in size from 3.5mb to 5mb depending on the range of tones and colors in the image. In fact, I took a photo of the moon with a 90mm Elmarit at f/4.0 and 1/1000 of second. 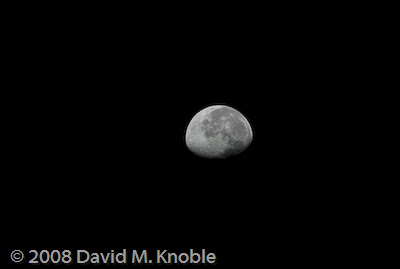 Because of all the black around the image, this DNG converted to 3.2mb. Astounding considering the beginning RAW data was over 30mb!

There are a few considerations, however. In terms of Lightroom and Photoshop CS3, no problems. I am sure there are other imaging software packages that also have no problem. After all, the resulting DNG file is an Adobe DNG image file. However, the Capture One LE software that came with the M8 will no longer read the DNG file. It was designed to read the M8 DNG file with the added lookup table. Since I don’t use that software, I don’t mind.

If you use Capture One (or C1 as it can be called), there are reports that using the software key that came with the M8 will also allow registration of Capture One 4, which is said to read the converted DNG file from the M8. I haven’t tried this, so I don’t know.

I have long read posts about how slow some digital cameras are at importing images into Lightroom. The DLux3 is certainly one of those cameras. However, since the beginning of my digital photography work, I have always taken the memory card out of the camera and performed my imports through a card reader. Why? Because technology consistently changes and typically it becomes faster. SD cards become faster (100mhz vs 133mhz). USB ports become faster (1.1 vs 2.0). All the while, our digital camera guts remain the same. So by removing the card from the camera and using the latest card readers, the fastest file transfer times can take place. You will not have to rely on the interface built into the camera by the manufacturer, which, by the way, may be an older technology for compatibility purposes.

My digital Lightroom work is not only faster now with the M8, but also takes less disk space. Remember that my film work is all scanned with a Nikon negative scanner. This results in 40mb TIFF files which can be slow to work with. The next tests I’ll run will deal with the noise in the M8 images under the new 2.0 firmware. I’ll compare mostly night shots with bright contrasting lights to look for dark shadows containing little noise. I’ll also develop some noise files for the M8 that can be used with NeatImage which is the noise reduction software I have used.