Last night we had a rare lunar conjunction with both Venus and Jupiter. As astronomy goes, light from the object you are viewing is the most important next to clear skies. Venus happens to be the brightest object in the sky next to the sun and then the moon. Jupiter is a close second. Thus, last nights lunar conjunction showed essentially the three brightest nighttime objects visible from earth. Here’s a photo of this event. 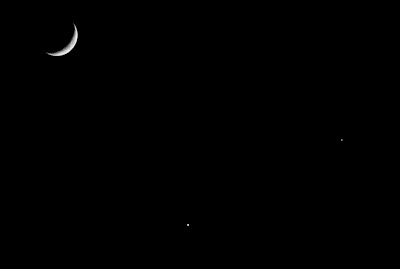 The moon is obvious in the upper left hand corner. Venus is the bright object in the lower middle and Jupiter is the object in the upper middle right. This image was taken with a Leica M-8 using a 90mm Elmarit at f/4.0 and a shutter speed of 1/60 second and ISO 160. This conjunction was visible from North Carolina a 7:11pm.

I understand that in parts of Europe, there was also a lunar occultation, where the Moon eclipsed Venus for some time. Most astrophotography is better done with a telescope and a CCD imaging camera, but the spread of this particular conjunction made it work well with a camera and a long lens. Enjoy!