I got it today, about 10:00am.  The package was well sealed and took a careful moment to open.  Josh at Dale Photo & Digital had just received two Lecia M Monochrom(s) – remember, the same owners run Leica Store Miami.  I have been studying this camera for about 4 months to see if it fit my work and my budget.  It was meant to be.  I asked Josh the day before what the status was of their Monochrom supply because it was out of stock for a good while.  He told me he had two – one to finish their presale list and one, well for me.  It was meant to be.

The Leica M Monochrom, or MM as many call it, has been out for a good while as new technology goes.  As I write this, the Leica M(240) is slowly dribbling into the United States and many are posting new images.  I am not trying to review the Monochrom because several well known folks have already provide that material (Think  Thorston Overgaard and his long running reivew of the M-9, Monochrome and M, or Steve Huff and the beginning of his multi-stage review).  Needless to say, I have found a wealth of information from these two gentlemen that helps me make decisions on both equipment and photography methods.

Those of you that know me understand my love of black and white photography, which extends back in time to the late 70’s with my first 120 box camera and led up through the 80’s as I taught photography lab (pre-digital era) at the University of North Carolina – Chapel Hill.  However, the tipping point to buy a Monochrom came from a well crafted series about the MM on the Leica Blog by f/Egor (what a great name for a blog).  He gave me the technical push to say I want a digital camera that acts like high speed film with the grain and character of a low speed film.

I’ll be writing more, hopefully sooner rather than later, about my experiences with Lightroom and the Monochrom.  My real job is CPA work and I’m afraid tax season is still upon us, but I had to have a taste before getting back to the grunt work.  This is an image of my wonderful receptionist, Cathy, who was not crazy about having a photo taken.  The great part was she really warmed up to it when she could see the finished results.   In any case, this image shows the raw file unadjusted and my adjustments (click to see larger).

The truth is two-fold. The images do come out grey.  Read f/Egor’s work to understand why this is really important.  In a nutshell, the grey image contains much more dynamic tone ranges which, in turn, allows us to create such a phenomenally dynamic print.  Below is a 100% view of the same (again, click to enlarge). 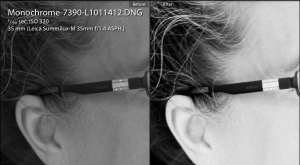 The detail, the range, the tones – all the hype of the Monochrom is there and ready for the taking.  I have gotten superb prints from the M9-P in black and white.  I have not gotten such great dynamic tone with such little effort from the M9-P.  We all know that the ISO range of the M9-P is low and I personally don’t shoot over ISO 800.  However, I’ve already pulled some images down from ISO 10,000 on the Monochrom.

I wrote a journal entry awhile back that I’ll post here wondering if film was dead.  It wasn’t technical, just a muse.  However, I know now, that film is not dead.  It is forever memorialized in the Monochrom.  More to come, I must work.

Added:  If you want any Leica equipment, a Monochrom included, call Josh and support Dale Photo & Digital.   The have tremendous knowledge and customer service.