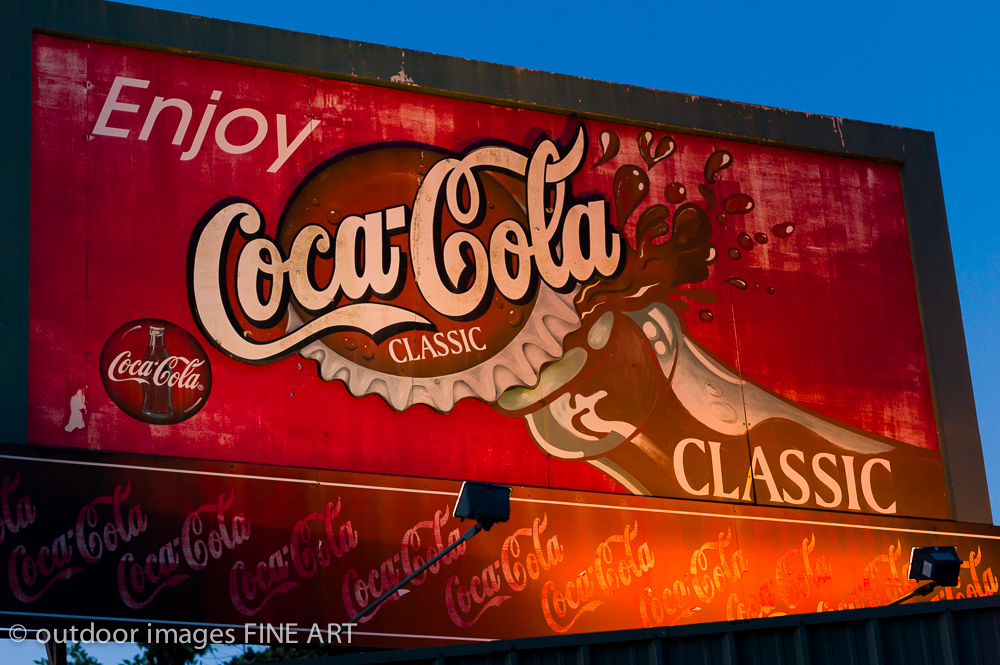 Light.  Light is the essence of photography.  Concentrated light can enhance and change the mood of many photographs.  The absence of light can have the same mood altering effect.  The creative fun in photography is learning which and when to use what kind of light!  I pass an old Coca-cola billboard on my way to work every day.  As the seasons change, I am going to work earlier in the sunlight day – which means it is getting darker with winter.  I started to notice the billboard lights were on until about 6:50 or 7:00 am every day.  I also noticed how well the billboard weathered and how bright and saturated the colors were.  So, I stopped.  It took some time to find a good perspective because the billboard is atop a building on a hill going straight down to a 4 lane road – not a place to take a tumble.

The first day I stopped, the images were too far away and too distorted.  I used a 35mm summilux.  I went back two days later with a clear blue sky (dark because of the early time) and used a 50mm  summilux.  I still did not like the perspective or the size, so I settled on a 90mm APO summicron.    I metered towards the light in the lower right and then opened up about 1 1/2 stops so I wouldn’t blow the highlights.  The ISO 800 on the M9-P only contributed a slight amount of grain.  I could have gone up to ISO 1600, but didn’t need to in this case.  As many attest, much over ISO 1600 with the M9 series brings a lot more grain to the image and it begins to look like film.  I put the camera on a sunlight white balance so the processing wouldn’t correct the color of the spot lights.

The point here is that the color of the lighting and the small amount of diffuse daylight really saturated the red and blue.  This is what I call a ‘luminous’ image and it has much more character than a middle of the day, direct reflected light image.  This is my challenge every day – to find the right light and capture that moment.