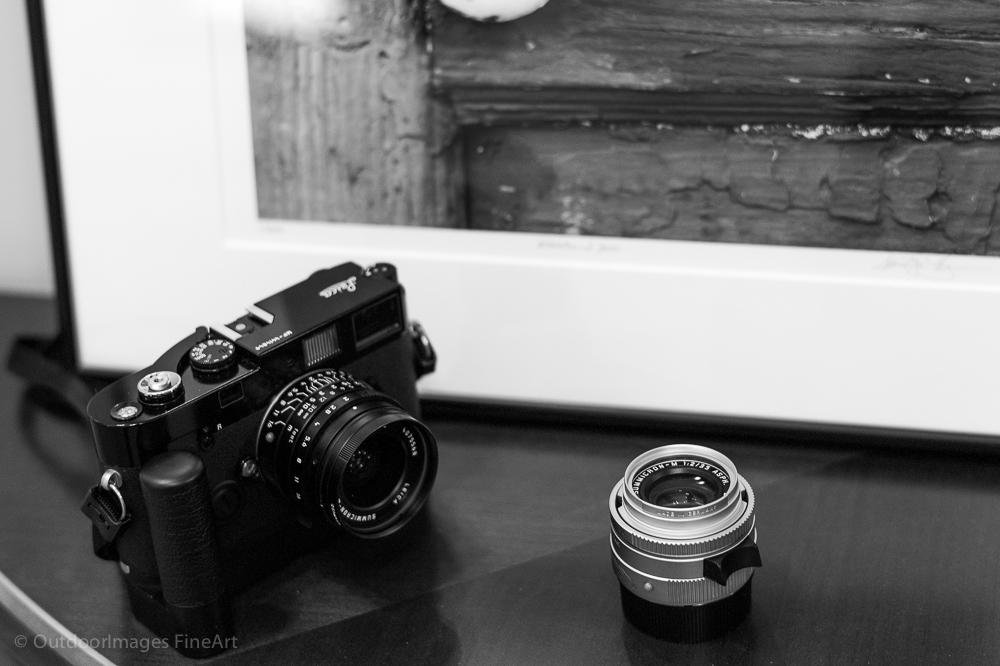 Anyone that follows my photography knows that I love the Leica M rangefinder system -using digital and film bodies – and the Leica glass is second to none in most instances.  So, with 3 new M bodies, 10 new lenses and 4 new cases introduced at Photokina, why am I suggesting there is little impact to the M-System?

The answer is simple.  Two of the new M bodies are film bodies, which is not the issue.  The Leica M-A (Typ 127) is a fully manual film camera body only missing the light meter found in the well established MP (Not the digital M-P, but film MP).  The cloth shutter is used with the same manual shutter speed range so one assumes the guts are essentially the same.  The exterior is made of brass top and bottom plates but uses the newer wrap material around the middle.  Except for the color, wrap and silver ISO dial on the back, the M-A is an MP without the electronics.  Remember, the MP can be used without a battery as it is also fully manual.

The other M body is, quite honestly, so intriguing that I would love to own one.  The M60 is an M (Typ 240) without the LCD electronics and menu buttons on the back being replaced with a simple ISO dial.  This stainless version of the M takes digital photography back to the basics with only shutter speed, f/stop, ISO and focus available to take a photograph.  The images are stored as DNG file with no JPEG – again, the bare essentials.  While this idea in itself would lure me to trade in an existing M body, there will only be 600 sets made that include a stainless version of the 35mm Summilux.  The lens is labeled ‘New’ and it may be a new recipe, but at 18,000 USD, the price is too steep for all but 600 people.

If you decided that expense was important and purchased the Summarit line of lenses to use with your M, then you have gained a partial f/stop as the standard lenses in this line move down from an f/2.5 to an f/2.4.  For the mathematically challenged, that is only a 0.1 f/stop increase in light gathering.  The other M line lenses issued are equally less dramatic.

I have to say, I have been anxiously waiting for the new lens announcements as we expected a chrome Noctilux and 35mm Summilux.  However, along with the chrome colored Summarit lenses released, these are silver anodized aluminum and not chromed brass.  You can verify this as you read the lens weights.  The weight of each new silver lens is identical to its black aluminum counterpart.  Certainly there is a market for silver lenses and I own 6 different chrome lenses.  One advantage is the much lower change in brass under cold and hot temperatures which keeps the focus constant in changing conditions.  However, the new silver look comes at a price.  I know the cost to Leica for a silver anodized coating is more, but so is the brass.  Until 2014, the brass and aluminum lens costs new were the same!  Now, we pay more for the silver lens that is still aluminum.

If you review the new X series Leica bodies announced at Photokina, you will find an X2 different only in exterior and some functionality (The Leica X-E Typ 102).  The Leica X (Typ 113) has a new lens which is presumably from the research done for the Leica T system.  The X now sports a 23mm f/1.7 lens (35mm equivalent) compared to the f/2.8 originally issued on the X1 and X2.  Not much going on here as the X series really seems a little outdated with the Leica T.

In my opinion, the real announcement is the new Leica D-Lux (Typ 109).  This has an updated built-in viewfinder and an incrementally better lens than the last model.  However, the real change is a larger 4/3 sensor.  I have used the D-Lux 3 through the D-Lux 6 and the sensor size had limitations in certain light levels.  This new sensor brings back an ultra compact pocket digital without breaking the bank for a bulky oversized viewfinder attachment.

Not all is mediocre.  My hope is that Leica will take the M60 and make it a standard offering in the M series so that it becomes more affordable than a limited series.  Also, a 28mm Summicron was released with other 100 year editions, so we can assume that eventually that lens will be released to purchase individually.  Finally, there is rumbling about a new Monochrom using the M (Typ 240) technology.  One Leica rep I spoke with said that isn’t on the pipeline and an other rep told me to wait – it’s coming.  Clearly a Monochrom advancement to the M technology would be a logical next step and I would pre-order one at announcement.  I love the current Monochrom image files, but I also love the current M operation.