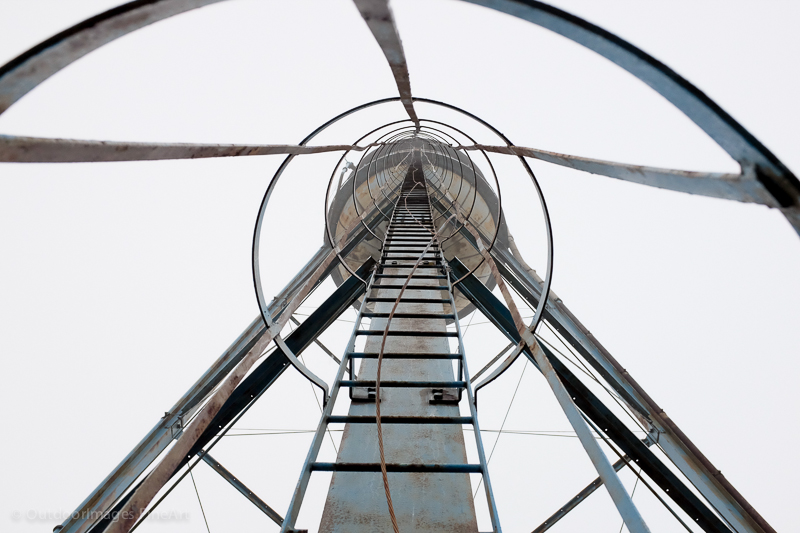 It was a dark and stormy night…

For those of you who remember the Peanuts cartoon strips, that was the beginning of every story Snoopy wrote on his typewriter, atop his doghouse.   In this case, it was a foggy, perfect photo morning. 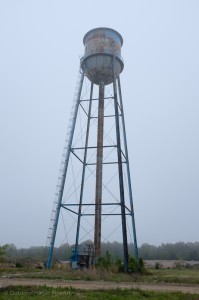 I had been watching for a good morning to shoot the old watertower that is still up in Riverwalk.  It is near the Catawba river in what is affectionately known by the natives as “Fort-Rock.”  That is, halfway between Fort Mill and Rock Hill.

Today was such a day and I eagerly pulled into the dirt parking lot, scouting for a good location to begin taking photographs.  I had the X100s with me and thought, another good test of the JPEGs!

Little did I know the newbie mistake I would make and how long it would take me to find out what mistake it was.

I walked slowly, side to side by the watertower.  I wanted to find a good profile that showed the caged ladder going to the top.  It is interesting and detailed and I wanted to see how the camera would handle both.

I settled on this view and took the first shot.  I like the exposure compensation dial on the top of the camera so I can adjust as the conditions change.  Here, I decided to keep the dial at an 1/3 under-exposure.  The X100s was set to capture fine JPEGs and RAW.  The JPEGs were set to standard, provia film. 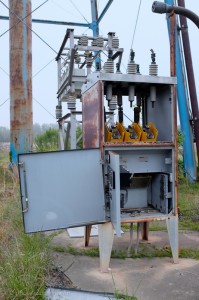 As I approached closer, I saw the old power junction box was open, and assuming the power was really off, decided it was a nice dynamic grey test and contained good color representation as well.  Click.

No giant lightning bolts.  Good.  You’ll have to note as we look at this series the blue paint on the watertower parts.  The blue representation here is exactly how the blue looked.  I do not use the Velvia film mode often, although I love the Velvia slide film saturation.  I’m always afraid that the electronic saturation will be too much.

Here, the standard film mode captured the bright blue really well and consistently with all but one shot.  This gives me confidence that the X100s will deliver good color.

On to the ladder.  I liked the view looking up the ladder and wondered just how many folks had the opportunity to stand where I was and look up.  Most water towers are fenced off, for obvious reasons.  I tried to take advantage of this point of view (and make it “My Point of View” – thank you Leica!).

looking up the ladder 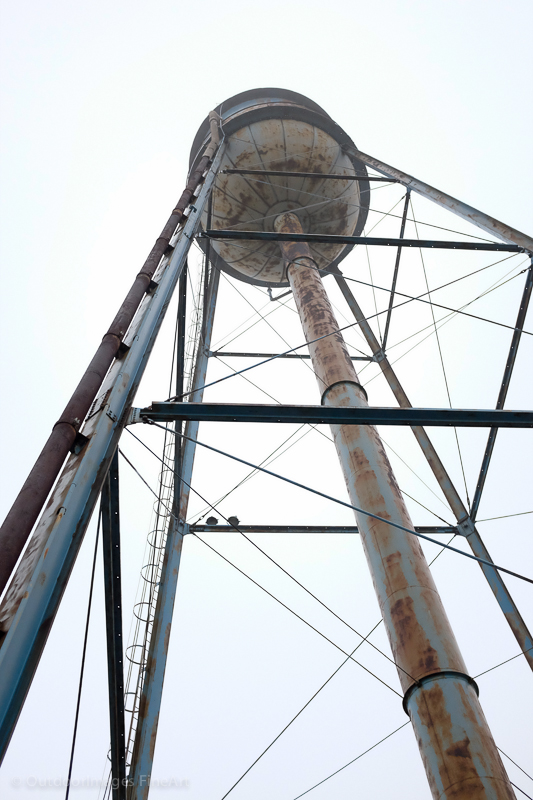 fading into the fog

After getting through these ladder shots and several under belly shots, I moved to the pipes and gears and what not surrounding the base of the watertower. 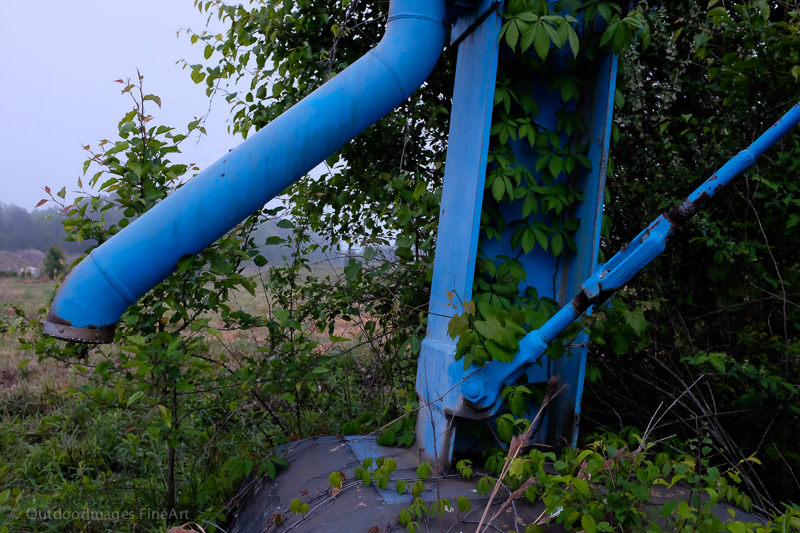 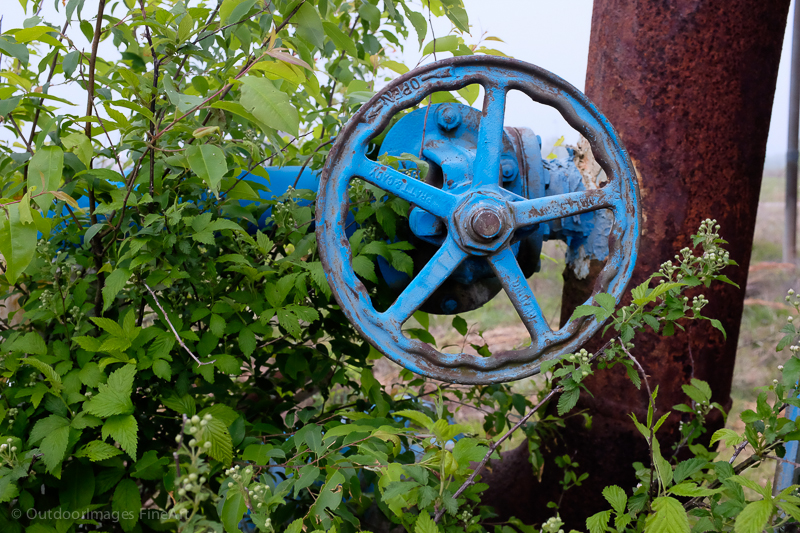 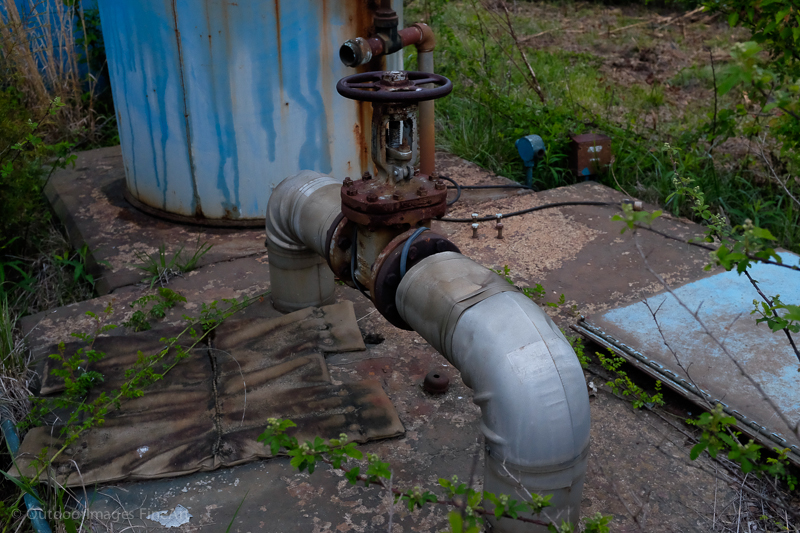 a cut-off valve of a type 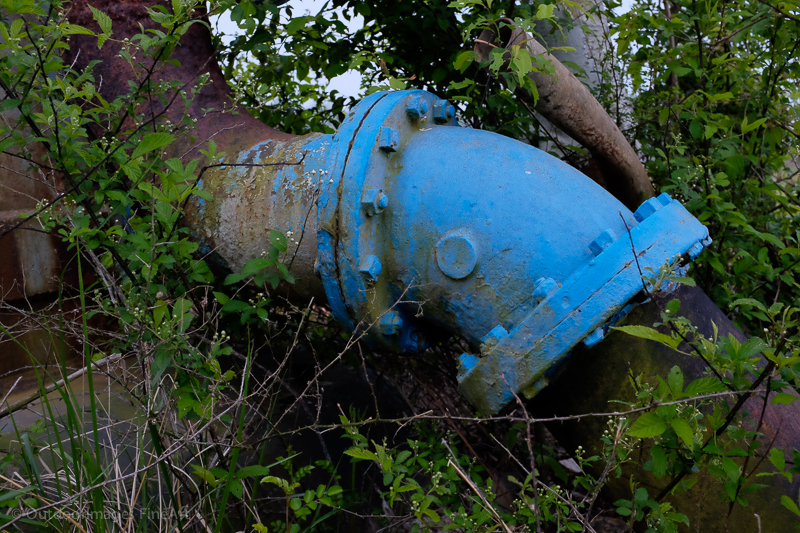 Here is where I finally realized the mistake.  I was working on another shot and realized the shutter speed was topping out at 1/1000 of a second at f/2.0.  This seemed high for a foggy morning.  Yes, the ISO was still set to 3200 from the photo shoots a few days ago.  I had just spent 30 minutes shooting wonderful lighting at ISO 3200 instead of ISO 320!

Lesson learned, although luck in the process.  These JPEGs out of the camera are still wonderful.  Blown up to 100% there isn’t much grain or noise.  Remember that the X100s has a random RGB color filter so that moire is less of a problem.  The result is a more random noise (grain) pattern.

This digital grain is much like that of the Leica Monochrom and pleasing when printed.  I continue to suggest that JPEGs from this camera are wonderful to use.  If you aren’t sure that you are going to get the right exposure and the image is a once in a lifetime cannot shoot again image – you will probably want to shoot RAW as well.

The good news is that the Fuji has a fast write speed and the fine JPEG + RAW writing to my SD card never slowed me down.  It is much faster than the X2 and the Leica M9 / MM.  I was using a Delkin 16GB SD card.

So, know your equipment, know the capability of the camera and by all means, check the ISO before starting!